Pride of the Apostles 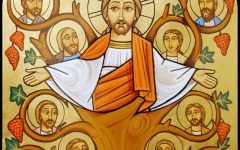 While we enjoy these days the fast of our fathers the Apostles, we remember the words of St. Cyril the Great in the introduction to the Creed describing the Lord Jesus Christ to be, “the pride of the apostles, the crown of the martyrs, the joy of righteous, the firmness of the churches, the forgiveness of sins”. St. Cyril gave us, then, an eloquent summary of the centrality of the Lord Jesus Christ. He is the precious stone for whose sake the apostles forsook everything to obtain Him.

Jesus Christ was the central theme of the apostles’ preaching. As they felt how much they were poor, ignorant, and weak, He became the object of their pride and glory when they obtained the grace of sonship to God through Him. St. Paul described that in a wonderful passage saying, “For you see your calling, brethren, that not many wise according to the flesh, not many mighty, not many noble, are called. But God has chosen the foolish things of the world to put to shame the wise, and God has chosen the weak things of the world to put to shame the things which are mighty; and the base things of the world and the things which are despised God has chosen, and the things which are not, to bring to nothing the things that are, that no flesh should glory in His presence. But of Him you are in Christ Jesus, who became for us wisdom from God — and righteousness and sanctification and redemption — that, as it is written, ‘He who glories, let him glory in the Lord.’” (1 Corinthians 1:26-31)

Many servants, along many times, deviated taking things other than the Lord Jesus Christ as object of their pride. They were proud either of their personal abilities and talents, their churches’ bank credits, their credit of love in the hearts of people they serve, their old age and experience, their ascetic practices and self-righteousness, their studies and earned scientific grades, or their history full of achievements and successful projects. As for our fathers, the apostles, they acquired to themselves none of these things. They, rather, gave a wonderful model to every bishop, priest, and servant, singing with the psalmist saying, “In God we boast all day long” (Psalms 4:8). The saying of the psalm, “For You are the glory of their strength” (Psalm 89:17), applied to them.

The words pride of the apostles has no time frame. This means that the Lord Jesus Christ was not the pride of the apostles only in their earthly life but He would remain their pride forever in the age to come. Pride, mentioned here, is not a certain act in a specific time frame, but is a constant state. One cannot be proud of a lowly something or someone. People are usually proud of precious things that they highly value. Hence, the apostles would not be proud of the Lord Jesus Christ unless they accepted the testimony of the Father about Him which they heard by their own ears during His baptism and His transfiguration on the mount Tabor, and also unless they accepted the testimony of the Holy Spirit about Him within their hearts. Being proud of someone is associated with joy. No one is proud of something or someone while he is frowning. As he feels the degree of greatness of the grace and gratuity of the divine gift, he becomes greatly joyful. Being proud of something or someone is also associated with praise and gratitude. There is no place for grumbling and complaining where there is pride of Christ, but thanksgiving and glorification.

Let us all learn how to fix our eyes on the Lord Jesus Christ so that He, alone, becomes the object of our pride, like our fathers the apostles. We can, then, praise joyfully with the virgin of the Song of Solomon saying, “This is my beloved, and this is my friend, O daughters of Jerusalem!” (Song of Solomon 5:16).

Articles of the Month